On the way to Whitney

Sky Pilot sitting next to some Sky Pilots! 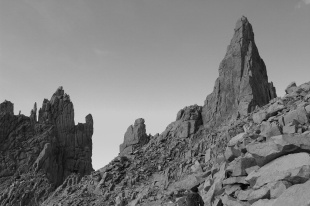 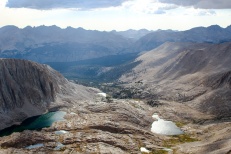 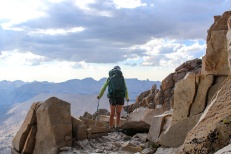 The sun begins to set

The Summit of Whitney

A blaze of glory 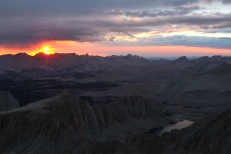 The Highest I’ve Ever Been

“I am hopelessly and forever a mountaineer.” – John Muir

The day had finally come. Waking at Wallace Creek, we knew what was ahead.  Hike to Guitar Lake, set base camp, and summit Mt. Whitney in the evening.  (In case you didn’t know, Mt. Whitney is the highest mountain in the lower 48 United States standing at 14,505 ft.)  The weather was beautiful and excitement was very high.

The thought of exiting the trail was both exalting and melancholy all at once.  We’d grown accustomed to drinking the finest glacier waters, bathing in streams, eating dehydrated foods, wiping our arses with sticks and rocks, hiking.  Always hiking.  We were detached from reality and we liked it that way.

We reached the summit in time to watch sunset.  It was one of the three most breathtaking sunsets I’ve ever witnessed.  Afterward, the winds picked up and some snow fell so we took shelter in the shelter house, ate dinner and waited for things to calm.  Around 10pm, we began our hike downward.  The full moon lit the night sky with such clarity, not even a headlamp was needed.

We got back to camp around 1am and slept like kings in our sleeping bag camp bed master suites.  We had an unusual game plan that brought us over trail crest twice; once for the summit and once again in the morning.

And that’s what we did.  In the morning we packed up, and hiked over the trail crest.  It was a big hike, but we had trained the last 19 days for it.  As we crested, a 6000′ descent awaited us.  At that point, the thought of a hot burger was all I needed to put my head down and grind.  The camera didn’t come out once.

And finally, after a few more hours, we reached Whitney Portal and went directly to the grill.  Burgers, fries, ice cream, we were in heaven.  The trail was now behind us, and a new journey lie ahead.  To hitchhike out, to find a bus north, to now acclimate again to the ways of the real world.  There’s no doubt, this hike changed me.  The mountains are in me now, and I will always aim to be in the mountains.  For I too am hopelessly and forever a mountaineer.

If you haven’t seen the time lapse video of the trip, check it out!  Feel free to share if you know someone who would enjoy it.

2 responses to “To View Mountains: Day 19 – The Highest I’ve Ever Been”